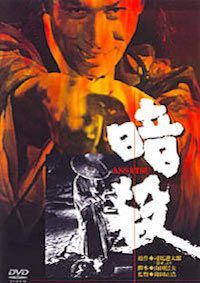 ANSATSU - B&W - 104 minutes - Hachiro Kiyokawa is an ambitious Ronin in a time of political turmoil in 19th Century Japan, he's a mysterious character and an expert swordsman who shifts between both factions - the Tokugawa Shogunate and the Emperor - to further his own ends. When the man charged with assassinating Kiyokawa challenges him to a public duel, and despite losing the duel, he does not take his own life for the sake of his honour, his master bemoans it as a sign of the times; the descent of honorable Samurai into political assassins, for sale to the highest bidder. The Kyoto Ronins have no loyalty or ideals and Kiyokawa himself embodies an amoral, mercenary attitude to life - mediating peace in the face of civil war only to realize his own ambitions of power. Based on a story by Ryotaro Shiba