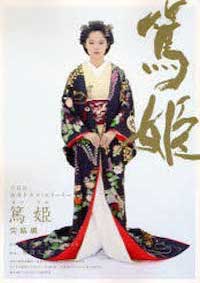 ATSUHIME - Color - NHK Taiga Drama - 50 Episodes - Based on Tomiko Miyao's novel Tensho-in Atsuhime. The protagonist is Tensho-in (Princess Atsu), the wife of Tokugawa Iesada, the thirteenth shogun of the Edo shogunate. It is the seventh Taiga drama to feature a female lead just two years since the previous 2006 Komyo ga Tsuji. Following the 2005 Yoshitsune, this is Miyao's second work to be turned into a Taiga drama. Following the 2004 Shinsengumi!, it is also the second Taiga drama taking place at the end of the Edo shogunate. The character of Tensho-in was previously taken up in the 2003 Fuji Television series Ooku (staring Kanno Miho). The lead role is performed by Aoi Miyazaki, for which it is her first Taiga drama lead. She is also the youngest to play the lead role. In May, 2008 she won a Galaxy Award for her work in this role. The first half of the story predominantly takes place in Kagoshima prefecture, and as such many of the actors and music coordinators are from Kagoshima. The latter half mainly proceeds with the politics around the Tokugawa Shogunate after she moved to Edo to marry Tokugawa Iesada.