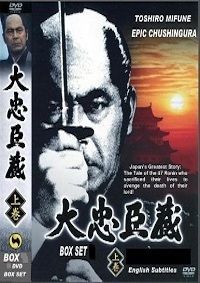 DAI CHUSHINGURA - Color - 52 Episodes - The epic story of the 47 Ronin who sacrificed their lives in order to avenge their Lord has never been told like this before. This 52 episode series was produced by Japan’s greatest movie star Mifune Toshiro, who also portrays Chief Counsellor Oishi Kuranosuke and features an all-star cast. Episodes 1 - 4 introduce the main characters and sets the stage for the events to come, with the initial reason for Kira's hatred of Asano shown in a new light as things progress towards the fateful incident at Edo castle. The year 1701 started off with a total eclipse of the sun in Japan. A frightful and ominous beginning, to say the least... Every moment of this dynamic series is filled with gripping drama, which then explodes into exciting action. The production values in this series are clearly of motion picture level.