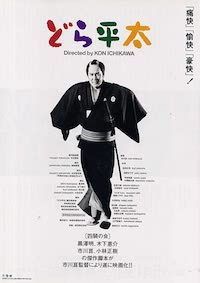 
DORA HEITA - Color - 111 minutes - Koheita Mochizuki a Samurai selected by the Regional Lord to be the Magistrate of the particularly lawless district of Horisoto, a place where three other officers have disappeared. Mochizuki's reputation for liquor and his general disregard of rules has earned him the nickname Dora-Heita, or "alley cat". His first task is to clean out three powerful gangs who control Horisoto, keeping it awash in prostitution, extortion, gambling, and murder. Though Samurai are forbidden to tarnish themselves with such riff-raff, he boldly ventures into the prohibited brothel quarters and plays up his persona in order to flush out the real criminals. With almost everyone in the area out to get him, Mochizuki's life is further complicated by the appearance of geisha and former mistress Kosei, who demands that he take her back. Dora-Heita was written in 1969 by Akira Kurosawa, Kon Ichikawa, Keisuke Kinoshita, and Masaki Kobayashi as the first collaborative project for their newly formed production company.