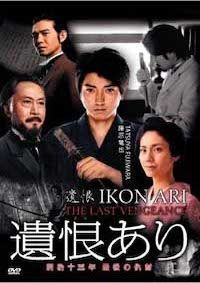 IKON ARI: MEIJI JUUSAN-NEN SAIGO NO ADAUCHI - Color - 118 minutes - In the fifth month of Keio 4 (1868), on the brink of the new Meiji era, Usui Watari, the administrator of the small domain of Akizuki in Kyushu, and his wife, were assassinated. Blazing anger grew in their son, Rokuro (Fujiwara Tatsuya), who had witnessed their tragic deaths. However, the period dealt a cruel fate to Rokuro. Vengeance, once a samurai's virtue since the Kamakura era 700 years ago, has now transformed into murder - a crime that should be hated - with the passage into the Meiji era. Then in 1870, Rokuro created a great debate when he finally carried out his revenge. Should he be praised as the model of a filial child"? Or should he be judged a mere murderer"? Furthermore, the enemy he had attacked was a person who had a job as a judge... His name is Captain Sakae Oba. The US Soldiers called him the Fox with a sense of awe. With stealth and unpredictability he undermined the enemy forces with his guerrilla campaign. Being on an island that was under enemy control, Oba was prepared to fight them even if he was alone. For 16 months Captain Oba fought against the US forces to protect the lives of civilians. His troop was reduced to only 47 in the end. His courage and determination moved not just his own people but his foes alike.... Based on a true story.