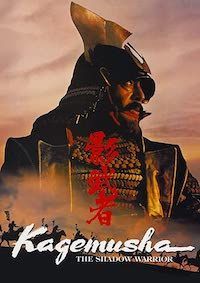 
THE SHADOW WARRIOR - Color - 180 minutes - Takeda Shingen,a powerful warlord,has become as legendary as the motto emblazoned on his war banners. Swift as the wind,silent as the forest,fierce as the fire ,immovable as the mountain. As he lyes dying from his battle wounds. Shingen orders his clan to find a double to replace him to keep his death secret so that his enemies will not attack. The man chosen for this role is called kagemusha(the shadow warrior) however,this kagemusha turns out to be a petty criminal who must transform himself into a great leader and command the allegiance of 25,000 samurai warriors.