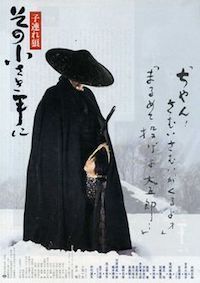 
LONE WOLF AND CUB: FINAL CONFLICT - Color - 119 minutes - A noble samurai serving the Shogun as 'Kogi Kaishaku-nin' (Official Executioner) is the target of a plot by the evil Yagyu Clan to take away his position and replace him with a member of their own family. When his wife is murdered and evidence is produced that he was plotting against the Shogun the Code of Bushido calls for him and his son to commit sepuku. Instead he defies the Shogun's orders and takes up arms against his enemies, becoming an assassin for hire. The story of Lone Wolf and Cub has been told many times, but never like this. Starring the popular Tamura Masakazu as Ogami Itto opposite film legend Nakadai Tatsuya as Lord Yagyu Retsudo the full story can finally be told. A far different feeling from the earlier versions, we see the rise and fall of the House Of Ogami as the evil Yagyu Clan plots against them. Many surprises are to be found in this finely spun tale of love, honor, hatred, and revenge... leading to a showdown like no other before it!