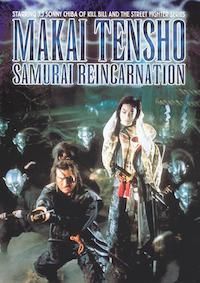 MAKAI TENSHO - Color - 122 minutes - A pseudo-historical variation of the story about the Christian rebellions during the opening years of the Tokugawa Shogunate, and their subsequent, brutal conclusion. That event seals the fate of thousands upon thousands of Christians. It is here where our tale begins, amidst the bloodied aftermath of the massacre. After a mysterious ritual is performed, the leader of the Christians returns from the dead to exact his revenge on the Shogunate. He vows the destruction of Japan and it's rulers. But before that can happen he must gather his retinue. Tortured, wretched souls whose life has been incomplete, unfinished. He offers them a second chance. Reincarnation, as demons like himself. This leaves the Yagyu clan with Jubei Yagyu (Sonny Chiba) and his father Tajima Yagyu (Tomisaburo Wakayama) as the only ones capable of confronting them.