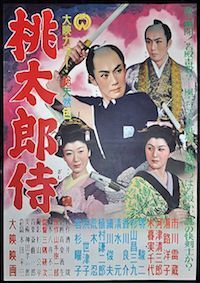 
THE DEMON CRUSADER - Color - 86 minutes - An early masterpiece from filmmaker Misumi Kenji. Based on the novel by Kiichiro Yamate (1899–1978) first published in 1946. Ichikawa Raizo is terrific in double roles as the Edo-period Ronin Shinjiro, who assumes the name of Momotaro and his older twin brother, Shinnosuke, heir to the Sanuki clan. When Momotaro stumbles upon a sinister plot by high ranking officials of his brother’s clan to usurp the succession process and install a new successor he rushes to the aid of his brother in this good-versus-evil plot. Momotaro-zamurai has been the basis for many jidaigeki films and television series. The first, with the same title as the novel, was released in 1952, the second version with Ichikawa Raizo in 1957, then Kotaro Satomi took the role in the 1960 production, and Kojiro Hongo played the part in 1963. A television series premiered in 1976 and continued until 1981, then in 2006 a new television series premiered on TV Asahi.