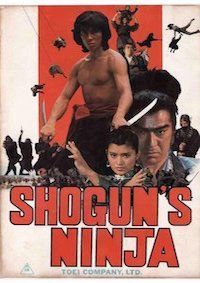 NINJA BUGEICHO MOMOCHI SANDAYU - Color - 117 minutes - Martial arts stars Sonny Chiba and Hiroyuki Sanada stand on opposite sides of a battle over hidden treasure in 'SHOGUN'S NINJA'. Shiranui (Chiba) is a ruthless Koga Ninja leader who wants the fortune in gold held by the Momochi Clan of the Iga Ninja. In order to find it, he needs two daggers that point the way towards the gold. To gain one of the daggers, he attacks the Momochi compound and slays its inhabitants. The heir to this clan, Takamaru (Sanada), is then sent to China, where he learns kung fu. Many years later, while Shiranui still searches for the treasure, Takamaru comes back to Japan as a deadly kung-fu fighter. Takamaru now has the other dagger that Shiranui wants----but he also seeks revenge as the last surviving member of the Momochi Clan!