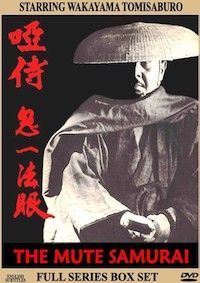 OSHI SAMURAI KIICHI HOGAN - Color - 26 Episodes - WAKAYAMA TOMISABURO plays "The Demon" Kiichi Hogan, a bounty hunter who is trying to raise enough money to gain passage to Spain, so he can hunt down the Spanish Master Swordsman Gonzales. It was eighteen years earlier that Gonzales had cut down the young mans Father, raped his fiancee, and cut the youth's throat, thus robbing him of his voice forever. The swordplay is superb & despite having no dialogue Wakayama gives an excellent performance as the physically & mentally scarred Kiichi Hogan, who cuts a sinister figure with his cloak & straw hat. His gentleness with defenseless people & animals is contrasted with the ruthless slaying of anyone stupid enough to take him on with a sword.