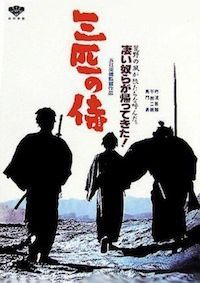 SANBIKI NO SAMURAI- B&W - 94 minutes - A Masterless Samurai, a Mercenary and a Bodyguard join forces in a fierce battle to the death against the forces of a ruthless Magistrate. Shiba, a wandering Ronin, encounters a band of peasants who have kidnapped the daughter of their dictatorial Magistrate, in hopes of coercing from him a reduction in taxes. Shiba takes up their fight, joined by two renegades from the Magistrate's Guard, Sakura and Kikyo. These three outlaws soon find themselves in a battle to the death. This is the directorial debut of GOSHA HIDEO, considered to be the Master of Samurai Action Films in Japan.