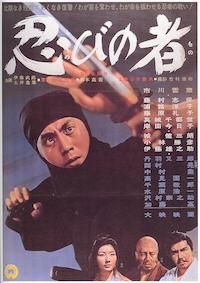 
NINJA 1: BAND OF ASSASSINS - B&W - 104 minutes - The first realistic film about the mysterious Japanese warriors called Ninja. Before this film, Ninja were usually portrayed as supernatural beings who hurled thunderbolts at their enemies. The ninjutsu master Hatsumi Masaaki provided the fighting direction. Set in 1575, it tells the story of how two Ninja Clans, the Iga and Koga each try to assassinate the great warlord Oda Nobunaga. Under orders to kill Oda for revenge after he burned the temples, the two groups each try to outdo each other in their efforts to end his reign. As portrayed by Wakayama Tomisaburo, the warlord is imperious and brutal in his treatment of the Ninja. Real Ninja tactics and techniques are shown for the first time. The story centers around Ishikawa Goemon (Ichikawa Raizo), who became one of history's best known Ninja warriors, and the way he is forced to carry out the assassination even after he tries to leave the clan.