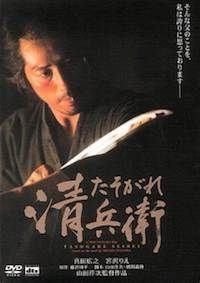 
TWILIGHT SAMURAI - Color - 129 minutes - Set in the late 19th Century, Seibei is a low ranking Samurai of the Unasaka Clan. The divorce of his childhood friend Tomoe leads him into a confrontation with her violent ex-husband, a high ranking Samurai. Just as Seibei begins to dream that despite his poverty he might win the hand of his beloved Tomoe he is caught in the shifting turmoil of the times and is assigned, against his wishes, to confront and kill a renowned warrior on the wrong side of a clan power struggle. Adapted from the novel by Shuuhei Fujisawa Winner of 13 Japanese Oscars including Best Film, Best Actor 2003. Winner of the Academy Awards USA Oscar for Best Foreign Language Film 2004.