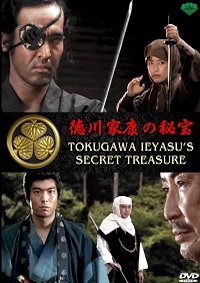 TOKUGAWA IEYASU NO HIBO - Color - 140 minutes - Ukita Heishiro, champion of Toda Ryu School, pledged his sword to his mentor Honda Masashige, retainer of the Maeda Clan. But his deadly blade will be awash with blood when Masashige draws Ukita and a small band of warriors into a quest to unravel the secrets of the late Tokugawa Ieyasu. For Lord Yagyu Munenori, desperate to find the shogun’s hoard of gold, will hurl deadly ninja blade for blade against them. And Ukita will face the most brutal swordsman in Japan… the ruthless Yagyu Jubei. In the struggle Ukita will win the love of two dangerous women: a beautiful, deadly warrior and the lovely prophetess of the forbidden Christian faith. Soon his quest will touch off a whirlwind, bringing Maeda Clan to the brink of total war against the shogunate.