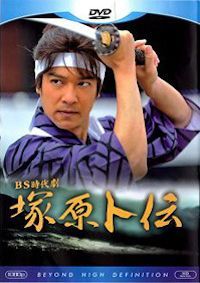 TSUKAHARA BOKUDEN - Color - 7 Episodes - Before Miyamoto Musashi, there was the legendary swordsman Tsukahara Bokuden!! Tsukahara Bokuden (塚原 卜伝?, 1489 - March 6, 1571) was a famous swordsman of the early Sengoku period. He was widely regarded as a Kensei (sword saint). He was the founder of a new Kashima style of fencing, and served as an instructor of Shogun Ashikaga Yoshiteru and Ise provincial governor Tomonori Kitabatake. Bokuden learned the Tenshin Shōden Katori Shintō-ryū from his adopted father and later honed his skills by engaging in musha shugyō (warrior's ascetic training), traveling throughout Japan and training with most of the skillful and knowledgeable swordsmen of the day. Tsukahara Bokuden was the classic knight-errant; a rich nobleman, he travelled the Japanese countryside, often with a full entourage. He later systematized the teaching of the Kashima area's local martial arts, including such approaches to combat as Kashima no tachi and Ichi no tachi. After allegedly receiving a divine inspiration from Takemikazuchi no kami, the deity of Kashima Shrine, he named his martial system as Kashima Shintō-ryū. He also, for a brief period, called his system Mutekatsu-ryū ("winning without hands"). Bokuden would change his world view and came to believe that the merit of not fighting far outweighed the benefits of killing one�s opponents, a philosophy that was unusual in his day but is generally accepted today by martial artists of most styles throughout the world.