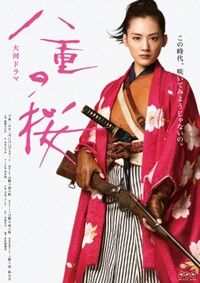 YAE NO SAKURA - Color - 50 Episodes - Yae (Haruka Ayase) is born into the Yamamoto family in Aizu, Fukushima Prefecture. Her father is Aizu domain's official gunnery instructor. Yae becomes more interested in guns than sewing. She learns gunnery from her brother Kakuma (Hidetoshi Nishijima) and participates in the Battle of Aizu. Aizu though loses the battle. Yae divorces her husband Naonosuke Kawasaki (Hiroki Hasegawa) and walks away from guns. She finds a new interest in learning. Yae then meets Jo Niijima (Joe Odagiri), the founder of Doshisha University, and marries him. Yae is a strong proponent of gender equality and acts according to what she believes in. This rubs others the wrong way, but her husband, who experienced western culture in the United States, supports her. In her later years, Yae servers as a nurse during the Russo-Japanese War. Yae is later referred to as the "Nightingale of Japan".